With fine weather, and the noon day sun blazing overhead, it was a fair group of us making the annual pilgrimmage up to Fairlie for the Annual New Years Day parade.

With most of us arriving at the Domain to find a park under the shade, it was several glares and “You can’t park that there!” comments in my direction when I parked the Escort – right in the middle of a contingent of Vauxhall owners vehicles.

With lunches to be had, packed from home or from the local shops, much time was spent reminicing of the previous year, the year ahead, and the admiring of vehicles – a number of which were of members from other branches, and a few mostly unseen before – one vehicle of note being Bill & Shona Weir’s newly restored 1961 Chevrolet Impala convertible, having just hit the road.

At just after 1:15pm it was time to roll, with most members heading to the Fairlie Heritage Museum to assemble for the parade.

With over triple the Fairlie town population out lining the streets, it was a parade to remember, with a cavalcade of a century worth of cars, trucks and heavy machinery interspersed travelling at 5 kmh through the main street, going for almost an hour. There were a few vehicles present that had celebrated their 100th birthdays, one of note being Irvine Black’s 1914 Saxon.

With the parade over, it was to the village green where the public could view the vehicles on show close up, with local music performances happening on the railway carriage in front. 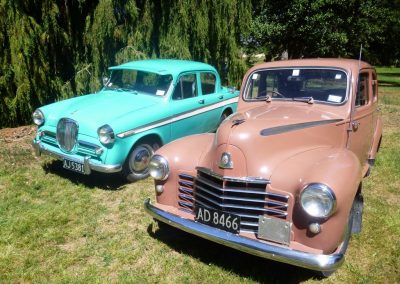 The Roddick Family’s 1959 Singer Gazelle and 1950 Vauxhall Wyvern at Fairlie. 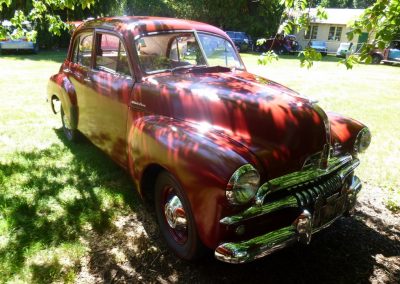 A couple of Morris Minors and a lone VW Beetle. The hood proved a great shelter from the sun. 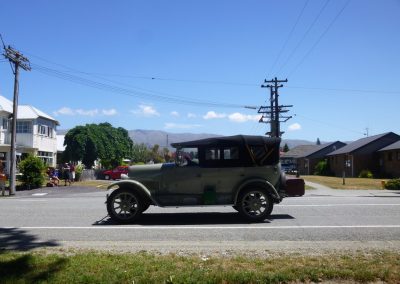 Fiat in the Parade 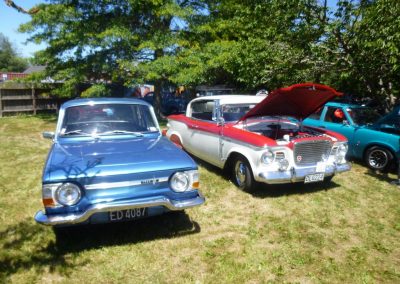