Our annual trip to Alpine country came up quickly on the calendar, and after much preparation work, particularly by the Days, Campbell’s, Foster’s and supporters it was outside our clubrooms on a sunny Labour weekend Saturday at 9am for 54 vehicles aged between 36 and over 100 years for a weekend’s Waitaki and Mackenzie Country motoring – most notably over half of the entrants vehicles were built before 1940.

With teas, coffees and lollies – placed by the organizers in everyone’s packs – consumed, it was soon time to hit the road at staggered start times, over a choice of three routes, highways, sealed and country, involving gravel. For this year, the route to the Mackenzie was headed south towards the Waitaki Valley.

After a tour of South Timaru, passing the Cemetery, Hospital and Botanic Gardens, it was out to Otipua, before crossing Brasells Bridge to reach Southburn and Gordons Valley. Approaching the Otaio Gorge region we soon met Alistair and Nola Day and their 1926 Dodge collecting our time trial scores. Soon after, we soon saw routes diverged – those on the sealed section were headed in direction of Bluecliffs, and for the adventurous few – myself included – a trip along the the gravel Back Line Road skirting the Hunter Hills.

A few kilometres past the Otaio Gorge campsite I encountered a first mechanical issue of a participant vehicle – a loose exhaust under the Irving’s Riley Elf, though a thumbs up from Darren Ladbrook meant all was well under control.
With a few twists and turns through upper Esk Valley region, tarseal – and other participants – were encountered at Hunter, the route taking us into Waimate, in full swing for Waimate 50 weekend. Taking the assigned detours, a number of us soon found ourselves distracted by a booksale in the museum complex.

Although the official lunchstop was Kurow, a number of members had meals prior – several vehicles encountered at the home of Ted’s bottle at Waihao. It was at Waihao that the adventurous few branched off, west to the Waihaorunga valleys and up over the rugged, scenic and not-to-be missed Meyers Pass – albeit most suitable for 2wd vehicles as large as the Weir’s 1953 Chevrolet Bel Air and as small as my 1980 Ford Escort. It was certainly a route rarely travelled, being a rutted single lane track in many parts with a number of ford crossings, closed gates, and tussock growing through the wheel tracks – the only motorist I encountered in the opposite direction was a friendly touring bike rider.

After the pass, it was a trip via Hakataramea to meet participants at Kurow that travelled via Ikawai – owing to the weather those shops selling ice-creams made a roaring trade.

After Kurow, it was a trip up into Hydro Dam country, our route taking us across Aviemore and Benmore Dams and past many Caravans and campers – looking to have settled in for summer. With the dams traversed it was a clear run up to Omarama and Twizel, with participants taking a relaxed evening before our Sunday meet.

With Sunday dawning, it was outside the Twizel A-Frame Chalet motels at 10 for field tests – Alistair and Nola Day and John and Janet Campbell having several engaging field tests intended to stretch the mind – questions including the Goddard Trophy winner – Diane Ross being a participant; where the Campbell’s Chevrolet was parked, and memorizing your VCC membership number. With braincells stretched, it was a 29mph speedtest outside Twizel, before hitting the road to Mt Cook – John and Marion Foster conducting a compulsory stop just before the Hermitage for the presenting of plaques.

All entrants vehicles soon found pride of place in the gardens in front of the Hermitage – and gained plenty of attention from tourists and bystanders. One that recieved more than its fair share of attention was Graham Rae’s 1925 Fiat 501C – with tie-rod issues, soon fixed by several phonecalls between members, a hacksaw and a spare length of metal ‘lying around’.

Dinner was soon had by many at the Hermitage restaurant, and much time was taken inside the tourists shops, and ‘Sir Edmund Hillary Alpine centre’. A retreat was soon made back to Twizel by most of us by mid afternoon, where a great evening’s socializing, meal and prizegiving was had at the Top Hut – many stories shared between tables throughout the night – Monday being a day quietly returning home for many, a fair number taking the opposing route via Lake Tekapo.

Thankyou to the organizers for making this event an interesting one. 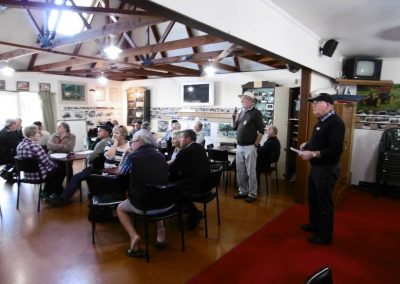 The briefing before the start of the Mt Cook Rally 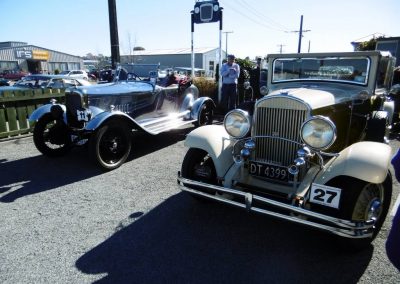 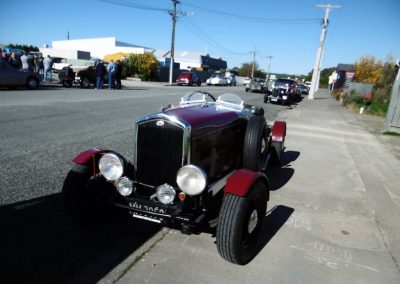 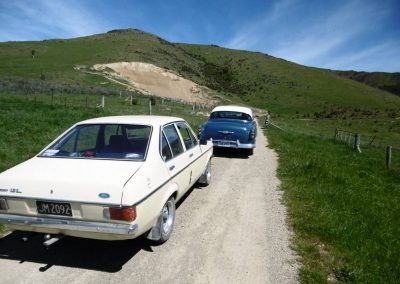 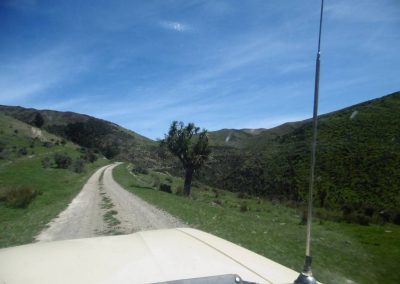 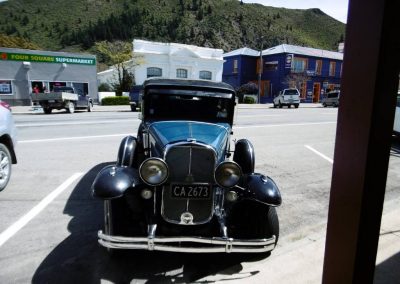 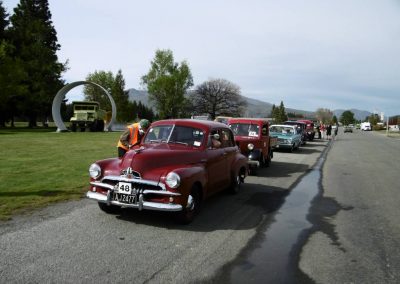 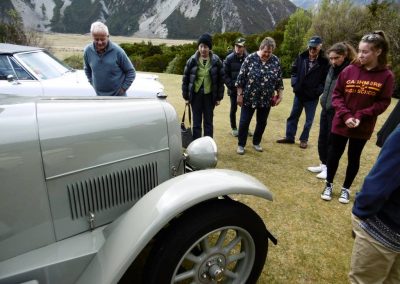 On-lookers surrounding Graham Rae’s 1925 Fiat when repairs were being made. 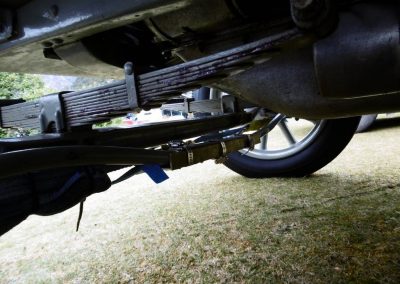 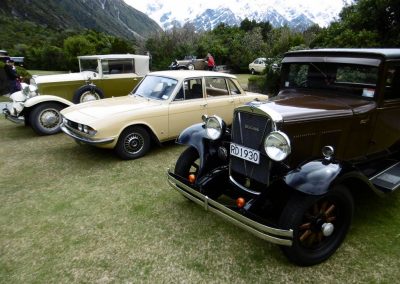 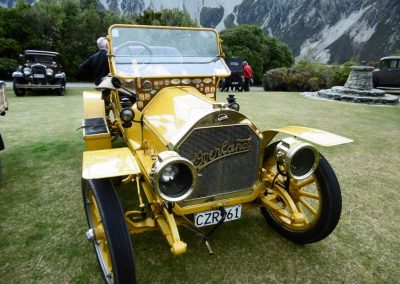 Alan Averis’ 1912 Overland at Mt Cook – a place that this car has visited over many decades prior. 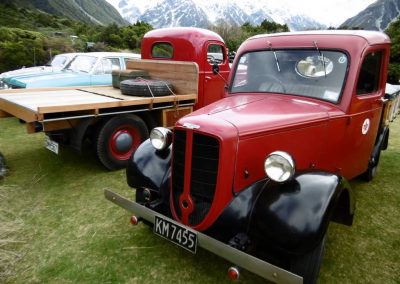 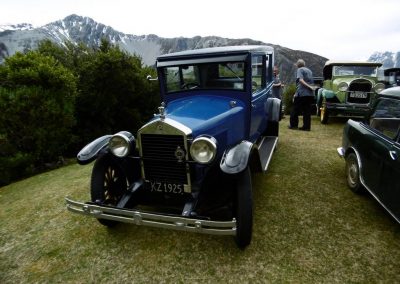 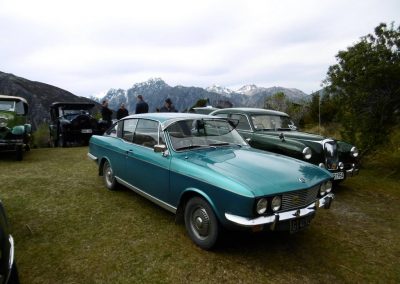 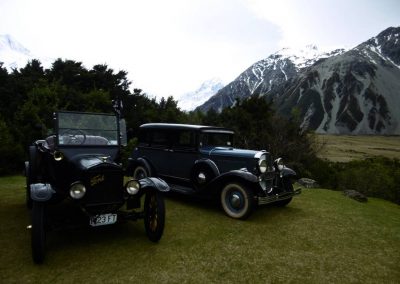 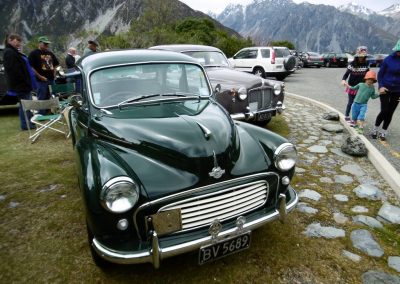 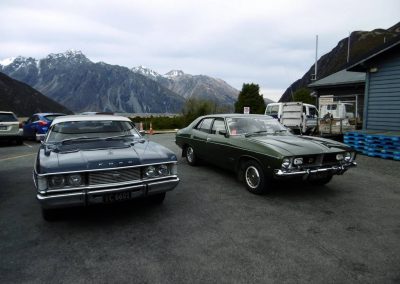 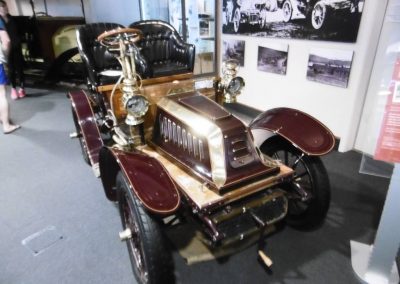 The first car to Mt Cook. 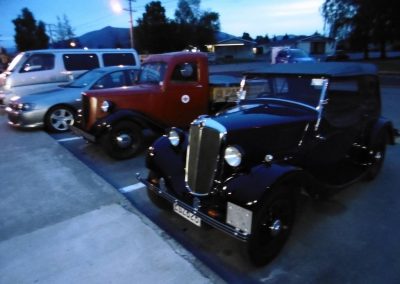 Entrants on the Sunday night, parked outside the Top Hut in Twizel. 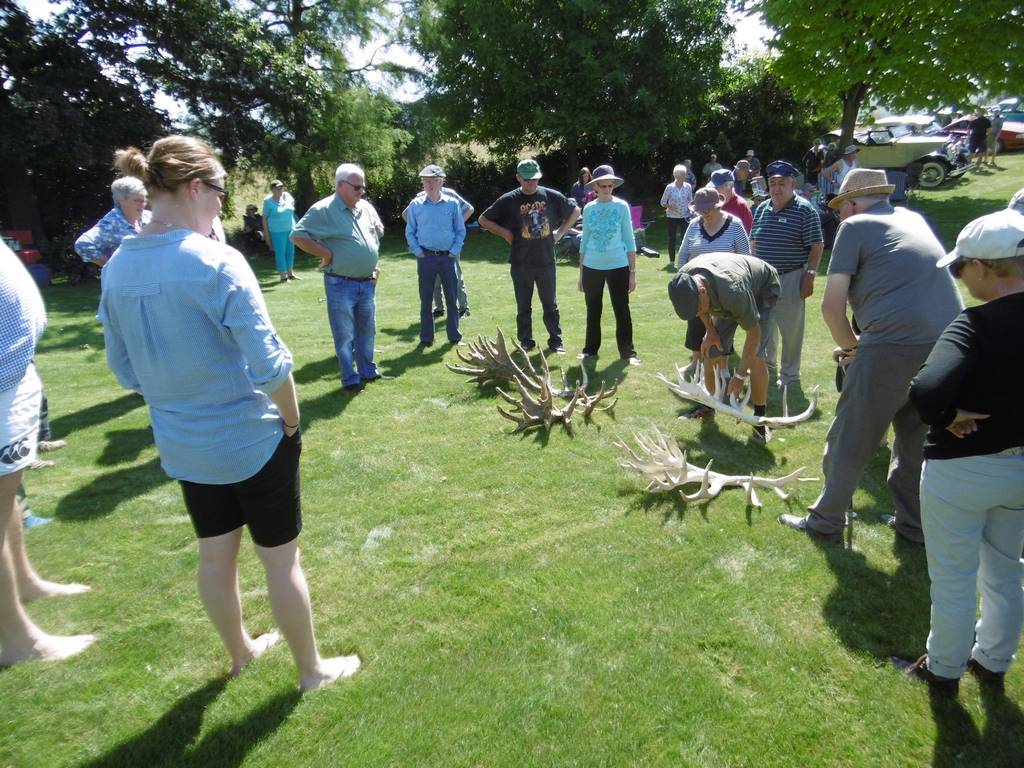