On 29 August a full 45 seater busload of us, organized by Ron Hammer and piloted at the helm by John Lester, went on a trip down to Dunedin. The trip was firmly in the calendars of members, having been officially announced by Ron Hammer at the August Quiz Night. Enough takers were present, to the point where when visiting Ron the following day, I found only one seat was left – and it wasquickly taken. Leaving from our Clubrooms at 2 to 8, it was a mostly traffic-less trip down – picking up Waimate members near the yellow shed, and Tony McGillen at Maheno enroute – with a stop at Palmerston, where we encountered a number of people in classic vehicles on a run to Middlemarch, including one of our members, Alan Geary.

Reaching Dunedin after 10:30, it was a trip up into the wilderness of the Leith Valley to reach Club HQ of the Otago Classic Motoring Club, housed in a well restored 19th century School House, nestled alongside the meandering flow of the Leith River. Meeting us there was member Colin Venables, who opened their well-purposed club rooms and parts shed. This shed was well laid out with parts for older vehicles, and a number of members did come back onto the bus with ‘mechanical luggage’. At the front of the shed was housed the pride of the club, their 1937 Ford V8 Bus; a vehicle that enthralled members, yet created arguments over its actual year of build.

Returning to the bus, we followed Colin’s little Nissan S-Cargo van through Dunedin to his farm, located up on a hill on the way to Brighton, at the far reaches of Green Island. Upon leaving the bus, we were soon greeted by a number of sheds leading up the hill, and within were a bewildering array of vehicles, and mechanical parts. Within the main shed at the top of the hill were an interesting selection of vehicles, including a Ford Model A Truck, 1958 Jaguar XK150, Singer SM1500, 1963 Morris Mini, Chevrolet Corvette, Ford Mustang and Daihatsu Max to name a few, not to mention automotive memorabilia. Further seen around the back were a fair number of future restorations in the making.

Certainly this stop had us interested, and it took time for everyone to return to the bus – which with the last member aboard, was soon headed back into Dunedin to our lunch stop, the Wharf Hotel, aptly named for its views of Dunedin’s industrial foreshore. While the pub appeared small from the outside, it easily housed all of us at the tables, complete with personalized menus. While waiting for meals, entertainment was provided by an Otago Harriers club, making several laps around the block at fast pace.

With members soon full to the brim with food, it was a trip around a few industrial blocks, and past the giant that is Forsyth Barr stadium to reach the hilly harbourside suburb of Ravensbourne, nestled below Signal Hill. Though the road to Port Chalmers was first taken, we soon found ourselves travelling through a labrynth of side streets, a number nearly rivalling Baldwin Street in the steepness stakes, not to mention narrowness – though enough for the bus to pass.

At the top of the hill, after a tight u-turn, we reached the home, and vast collection of Trevor Johnson. Within Trevor’s concrete block garage were a fair number of fine US sourced machinery; including a 1937 Hudson Coupe, 1937 Nash, 1938 Hudson Terraplane 1939 Nash Lafayette and 1962 Studebaker Hawk. A fair number of the vehicles present had lived in New Zealand for their whole lives, and each had interesting stories to tell, particularly with regards to previous owners. The newest car in the shed, a Ford Thunderbird was eagerly getting its final touches fitted in time for Dunedin’s Autospectacular.

While a fair few would have stayed longer, it was time by mid-afternoon to hit the road back up north, our Clubrooms duly reached by dusk.

Cheers Ron, for an interesting trip, Colin and Trevor for showing us your collections, and to John L for making the trip a safe one. 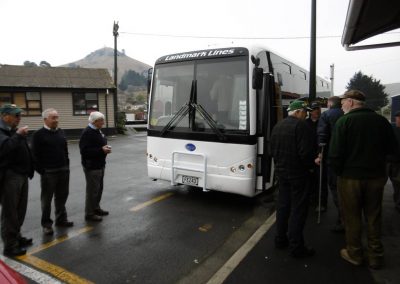 Our Bus, at the rest stop at Palmerston, En Route to Dunedin 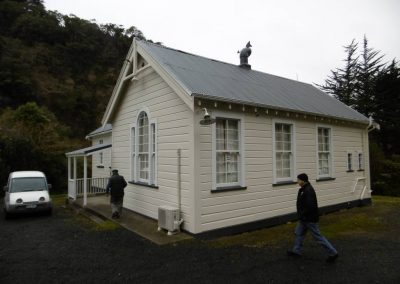 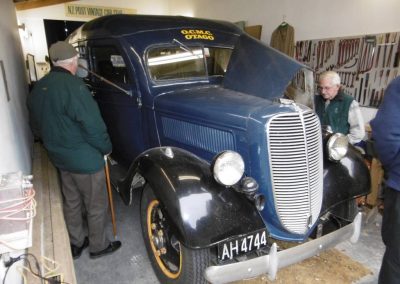 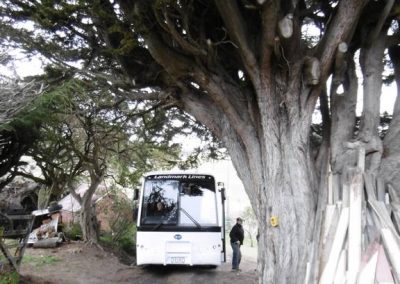 John Lester eases the bus up the hill at Colin Venables place, south of Green Island. 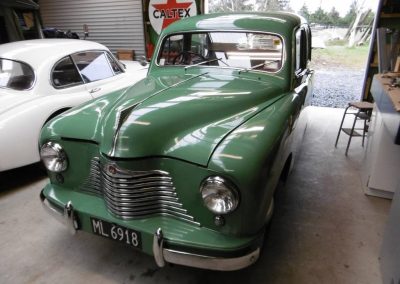 Colin Venables’ Singer, a part of his collection. 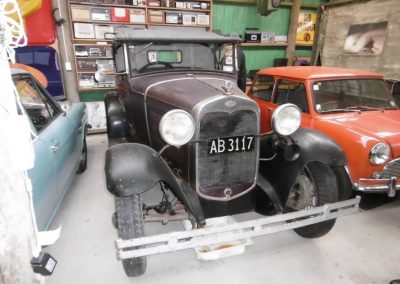 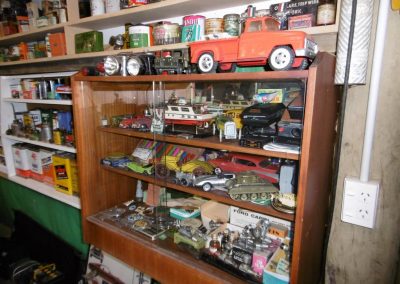 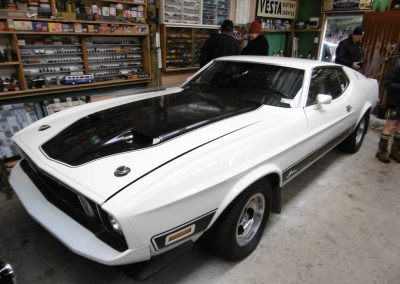 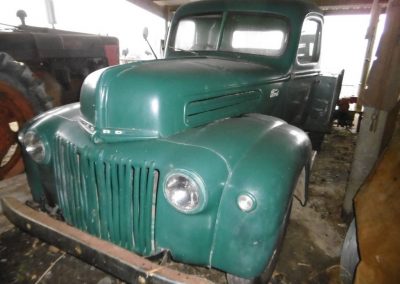 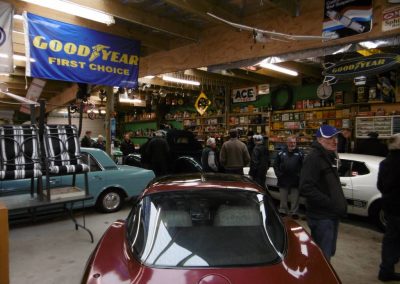 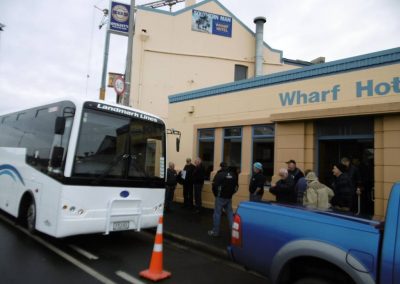 The Lunch Stop at the Wharf Hotel, in Dunedin’s Industrial port area. 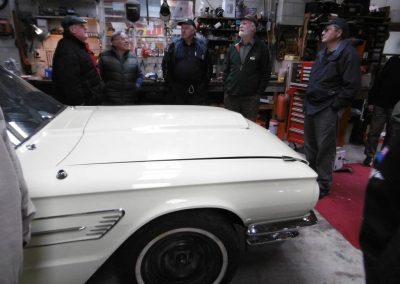 The Ford Thunderbird of Trevor Johnson, getting readied for Dunedin’s Autospectacular. 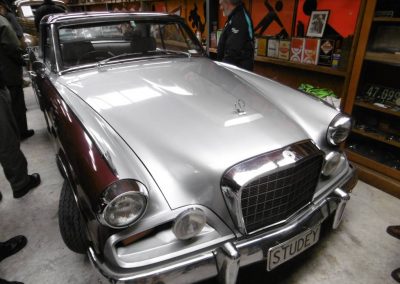 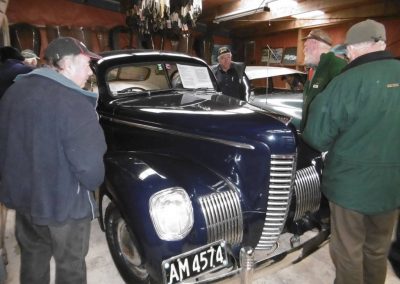 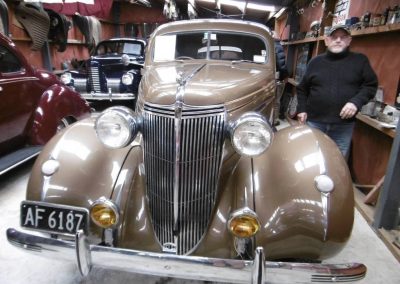 Trevor Johnson’s car collection, high on the hill at Ravensbourne. 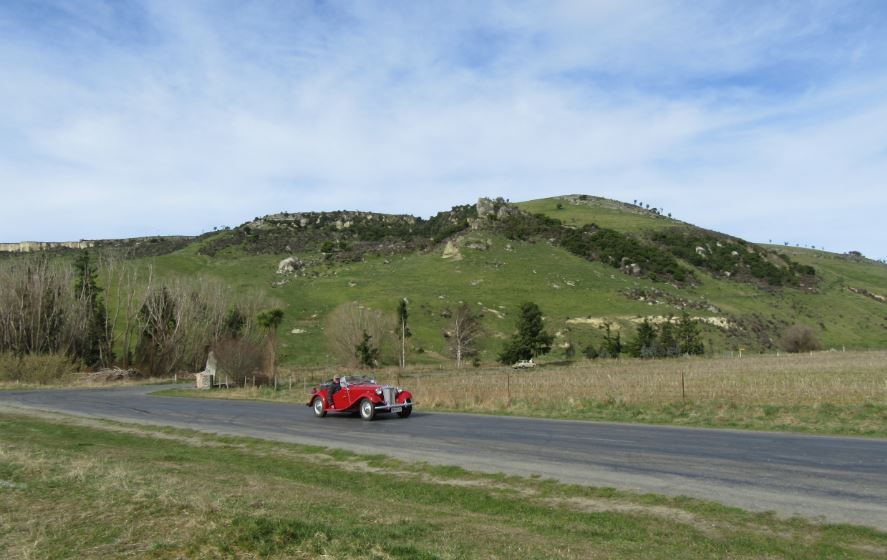