All 129 All British Classic Vehicle Day participants went on a magical mystical tour via Levels to St Andrews on Sunday.

The South Canterbury Vintage Car club first set up a display of the best of old British vehicles at Caroline Bay, then the drivers joined a mystery run. 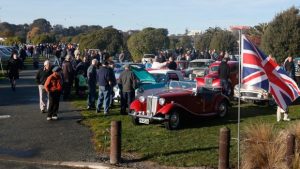 The amazing All British Vehicle day display was held at Caroline Bay on Sunday. Classics to modern showed their class at the event, which was followed by a mystery run to St Andrews. 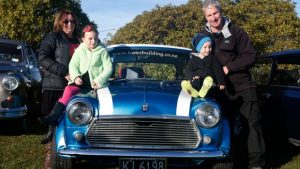 Beside their 1981 Austin Mini are from left, Michelle, Imogyn, Couper and Aidan Foster from Timaru. 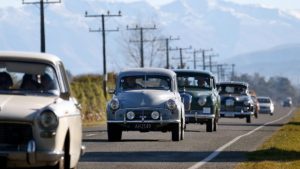 A convoy of classic cars on the way to St Andrews.

The convoy stopped at Timaru International Motor Raceway and had a few laps around the circuit before heading off through the back of beyond to St Andrews, for some food at the Masonic Hotel.

It was club member Grant Stewart’s final time of organising the event. He planned his first one in 2008 and has done one every year since. He now wants some time to do other things.

He said he had been approached this year to join up  with the Geraldine Classic Caravan Club’s display on the same day as a “double-whammy”.

But being organised, Stewart said he had already made commitments for his club’s Brit day so could not change the plans.

Past club committee member Gavin Munro said Stewart had done a great job in the cold and the wet.

“He’s always known to be wearing jandals and shorts. He doesn’t seem to feel the cold. He also drives an open top MG.”

Stewart is known for being in the background and behind the scenes taking photos and producing write-ups for the club as well.

“He’s a good character and gets along with most people,” Munro said.

Club members are unsure of who will take over Stewart’s mantle and organise the next All British Classic Vehicle Day, but whoever it is better get used to some “hard work”.